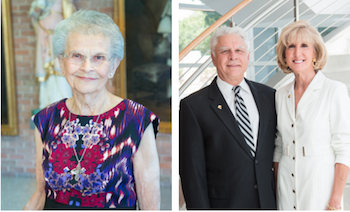 The legacy of a St. Agnes Academy education has continued for more than 100 years due to the support of alumnae, parents and friends for a strong Dominican, Catholic education. One way those impacted by the school show their gratitude is through including SAA in their estate plans.

Alberta Perucca Rogers ’48credits St. Agnes for giving her the education and skills she needed for a successful career, working her way up to serve as human resources director of an engineering firm. To show gratitude, Alberta included in her will a bequest to a scholarship fund she recently established at SAA. The fund – and her future gift – allows her to recognize her parents’ commitment to providing her a quality education, and ensures other women will have access to a similar experience.

“I particularly wanted to help those who could not afford attending St. Agnes without financial assistance. It was easy to include in my plans, and I encourage other alumnae to consider supporting our school by leaving a legacy,” Alberta says.

Alumnae parents Carol and Terry Lester encouraged their four daughters to aim high and not be intimidated by anyone. St. Agnes was the perfect school choice, allowing them to see young women leading every field – scholars, athletes, student body leaders, innovators – all females.

“We believe there are no more formative years than the high school years. A child enters St. Agnes, a woman leaves – a woman of integrity, intelligence, and compassion who feels no limits as to what she can achieve. We certainly feel that describes all our daughters,” Carol says.

When the Lesters reviewed their estate plans, it made sense to include SAA as a beneficiary of Terry’s IRA. “The future will bring challenges greater than ever seen before. We want to make sure Academy women will be around to guide the world for as long as possible. Any part we can play in that, we are happy to do,” Terry says.

Individuals who include St. Agnes as part of their planned giving through bequests, an endowment fund, life insurance policies or other means, become members of the St. Agnes Academy 1906 Society. 1906 Society members provide the support necessary to continue a tradition of excellence at St. Agnes - now and for future generations of Academy women. They are included in special events at St. Agnes and are listed annually in our recognition of donors.

Contact Mary Perrotti at 713.219.5466 to learn how you can join the 1906 Society. Or, let us know if you have already included St. Agnes in any level of a planned gift. We would love to recognize your support.