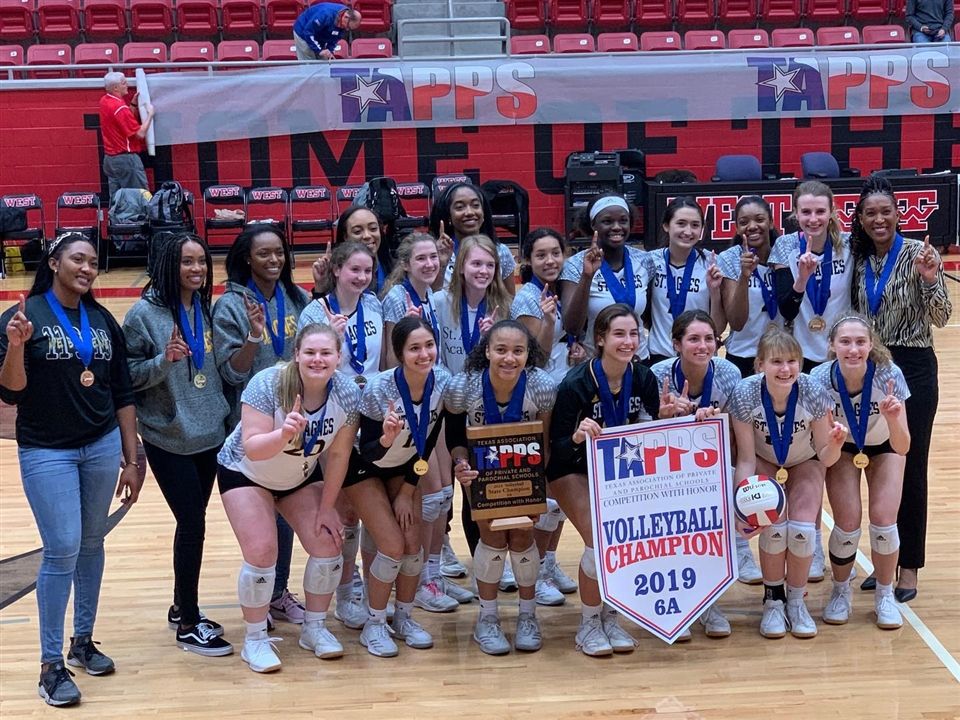 11/15/2019
HOUSTON – It's a banner that you can't miss.
Walk into the St. Agnes Academy Gym. Hanging there is a white banner. On it are the names of all the players – the four seniors honored up top with their names and numbers on clouds. The team's motto for the year Level Up is painted on in a bright green with the Tigers' logo in the middle.
To the right is a mountain. At the top of the snow-covered peak is a set of numbers.
11/9/19.
The date of the TAPPS 6A State Championship match would be played. Winning a state title would take this group to level up, win and climb the mountain.
"I knew when they created that banner as a visionary display of what we were about to go through that this was going to be a special year because the seniors got it," first-year St. Agnes Academy coach Cydryce McMillian said. "You don't win championships without good senior leadership. It's not about me, it's not about me as a coach. It's about the girls."
The Tigers climbed the mountain.
St. Agnes Academy overcame deficit after deficit, trailing 2-0 at one point in the title match to Plano Prestonwood, to come back win the match 3-2 and claim the program's first TAPPS Volleyball state championship since 2005.
"It was all about leveling up their mindset and knowing that they were champions and we matches the training with that," said. "When they all began to believe and buy-in, you get a state champion out of it."
McMillian came from St. Francis Episcopal to St. Agnes Academy last spring to take over the program.
When McMillian came in she wanted to look at the team with fresh eyes, not taking into consideration what any player had done in the past or how last year had gone. Through summer open gyms and then camp, the veteran coach, who won a state title in 2014, started seeing the pieces.
"As we began to piece the team together, I knew we had talent," McMillian said. "That's step one to winning any kind of championship or building any kind of program. Then I began to see personalities that I knew would make up a good team as well."
The senior group, including Rice-commit Sahara Maruska, Audrey Leonard, Julia Bradshaw and Izzie Agee, helped guide this team to the TAPPS 6A State Semifinals.
There, they ran into Concordia Lutheran, who the Tigers had gone 1-1 against during the season. Beating the Crusaders 3-2 during the season and then falling to them in the district tournament.
"So, I knew when we saw them again for the semi-final, I felt that we had the upper-hand," McMillian said. "We were 1-1. We had beat them when all our pieces were together and on fire and we could do it again. And we did."
The third meeting went to St. Agnes, setting up a showdown with Plano Prestonwood for the title.
In the TAPPS 6A State Championship match, early on it didn't look good for St. Agnes. Plano Prestonwood had raced out to a 2-0 lead.
"I told them, 'they call it a comeback for a reason'," McMillian said. "All we have to do is be good. We must execute our gameplan and be good."
St. Agnes won the third set before trailing 24-18 in the fourth set. One point. That's all Prestonwood needed to be champions.
With Grace Webber back serving, St. Agnes fought its way back into the match, trailing 24-22. Prestonwood took a timeout and out of that, the Tigers won five of the next six points to win the set 27-25 and tie the match 2-2.
"Unbelievable moment," McMillian said. "I knew going into set five it was ours."
St. Agnes and Plano Prestonwood were tied 12-12 at one point in the fifth set before the Tigers were able to finish it off and clinch the state title.
"If you go back and look in the TAPPS tournament, no other team had to go through what we did," McMillian said. "Beating Antonian in five, beating Concordia in five, beating Prestonwood in five. We had to battle. These girls have been through so much in the last week and a half to challenge who they are … they rose to the challenge."